"Norma G had what usually takes surgery to get rid of. Norma did not want surgery. Her friend, Maria referred her to Arc Of Life Family Spinal Care. Maria heard of others healing cysts, through upper cervical chiropractic, and believed chiropractic could help Norma. After only one month of care, Norma was able to avoid surgery! Her cysts were gone and her trust in her body’s healing potential arrived."

"My story not only concerns persistence but as well godly intervention. Almost nine years ago, I was nearly killed when defending our country during an aviation shootdown when a third party started shooting and bombing. The impact was so devastating that my friend was killed. Even though I survived my life would never be the same. As a result of that dreadful day, I spent the next year in and out of the hospital. I spent three months in a coma as a result of a permanent brain injury. The multiple fractures of my pelvis stole away my ability to walk.

During my stay in the hospital, my heart had stopped on three different occasions, adding to my brain damage. Up until a month ago, my life was spent trying to survive normal daily rituals while dealing with the severity of pain associated to the 14 broken bones from the incident. My life consisted of going from one doctor to the nest and then to a therapist. The health care professionals, however saw no improvement in sight. They stated that the use of walking aids would eventually turn into a wheelchair due to the arthritis, which would develop as a result of the trauma to my pelvis.

Then God brought me to the doctors at Arc Of Life Family Spinal Care. On this Thursday, my therapist was out of town. The muscles of my shoulders were raging with pain and I need something to control the burning. I had met the Doctors three months prior when they were just moving to this coast of Florida. Luckily, they decided to open their own office within a mile and had room to see me. What I didn’t know was that this office visit would change my life. Instead of going through the motions as the other therapist, the Doctors at Arc of Life Family Spinal Care began or visit by truly educating me about my body. They explained the wonderful power of Upper Cervical Chiropractic. 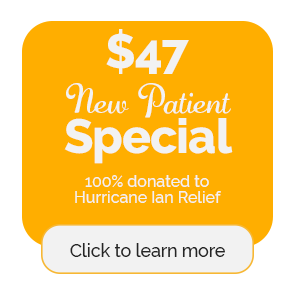